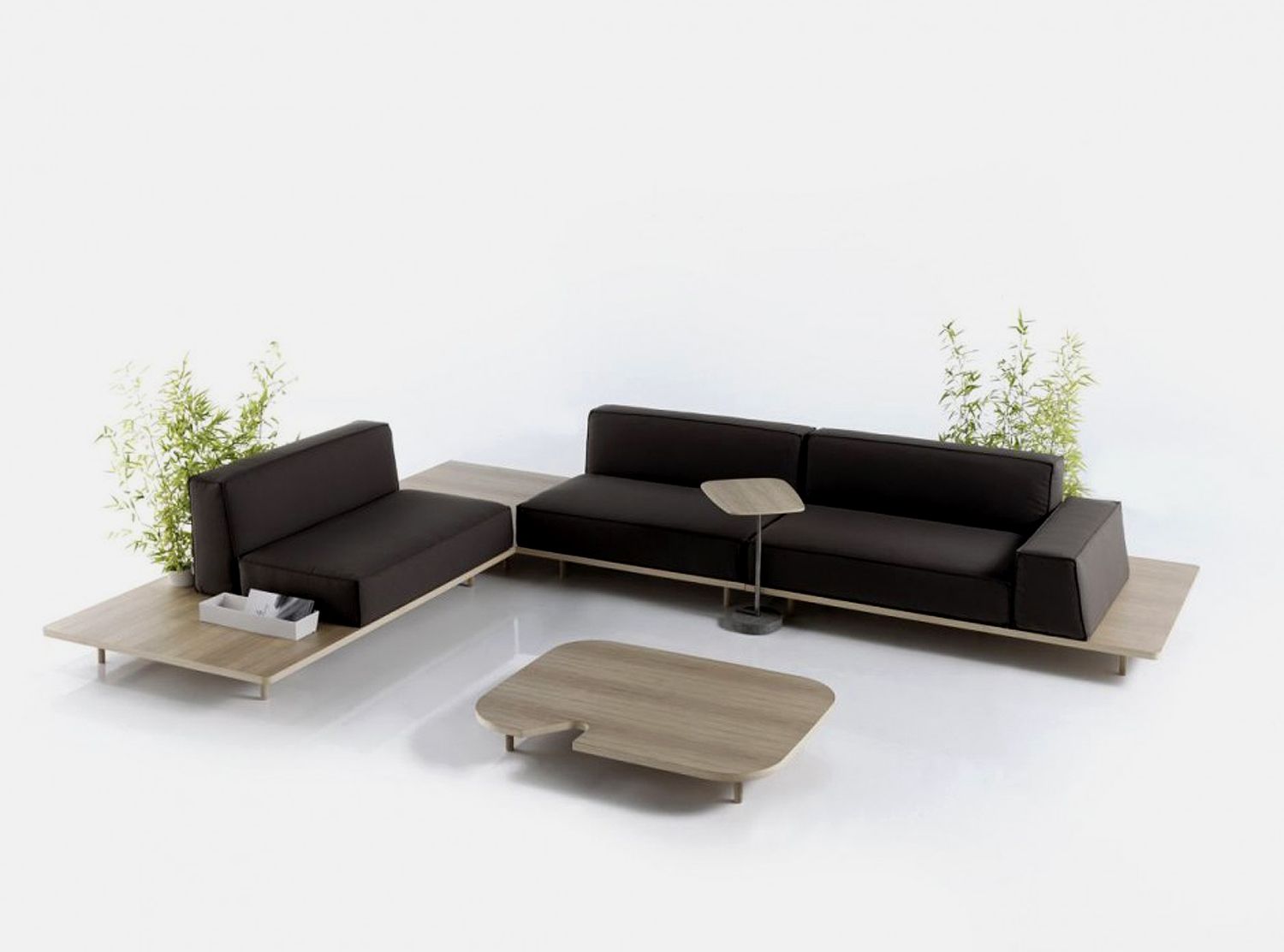 hey, i'm brad from fix this build that and today i'm going to show you how to make a modern outdoor sofa. since this is an outdoor sofa i'm using my favorite exterior wood cedar. cedar can come in many different colors from dark to light. so i started by sorting the 2x4s so i could get matching colors to pick the best pieces for each part and mark them with chalk. i started cutting down the parts on the miter saw and cut everything i needed for the side armrests assemblies. using a stop block here really makes short work of cutting all these repetitive parts. i took the eight parts to make up both sides and started the assembly. i drilled some 3/8 of an inch holes halfway through the tops of the armrests on each end.

after putting on some glue i drove two and a half inch screws into the holes to join the boards. i'll fill these holes later with cedar plugs for a nice look. you could also use pocket holes here and in most of the other parts of this build if you prefer that method. i repeated this process for the other side and before moving on i drilled some holes at the bottom of each of the assemblies to attach to the base of the armrests. i set the armrests aside and next i started cutting plugs for the holes with a 3/8 inch plug cutter in my drill press. a plug cutter is kind of like a drill bit with a hollow center. it gives you perfectly match plugs because you're using the same material as the rest of your project.

if you don't have a drill press or a plug cutter, you can always buy cedar dowels for the plugs. i glued the cedar plugs in place and used a little bit of cedar sawdust rubbed into the glue to fill any small gaps. next i cut the base stretcher that runs between the two arm rests on the bottom. this was initially just a design element, but it ended up adding a lot of stability to the whole sofa. i went ahead and cut the boards for the front in the back of the seat at the same time since there are similar measurements. i find it's easier to go ahead and knock out all the same size parts at one time so that you don't mess up the measurements. i flipped the stretcher and bottom armrest pieces upside down and drill some pilot holes

and then attach them with two and a half inch screws. again, i could have used a pocket hole jig here but i wanted to make a point on this build that you don't even really need a pocket hole jig to easily make something like this. i turn the stretcher assembly right side up and use glue a clamp and some 2.5 inch screws to attach the armrest using the holes i pre-drilled earlier. i later went back and plug these holes too with some of the cedar plugs. next i moved on to the seat base. i cut four short boards to go along with the front and backs i'd already made.

two of these boards will be inner supports and they need notches cut in them to hold the 1 by 4 seat slats. i laid out the notches on the boards and then took them over to the table saw and use the dado blade to cut them out. you could also do this by making a series of cuts within the notch area with a circular saw and then clearing them out with a chisel. i cut some cleats from 2x4 boards which i'll use to support the outer ends of the 1 by 4 slats and then i gang together all the 1x4s and cut the slats to length. with all the parts for the seat base ready, i began assembly.

i turned all the boards upside down, so the tops will be flush against my assembly surface. then i joined the outer frame with glue and some two and a half inch screws using clamps along the way to help square things up. for the inner supports, i space them evenly between the outer edges and secure them with screws as well. i flip the seat over and then i use the 1 by 4 slats to align the cleats. the slats should be flush with the outer frame so i clamp them in place and check the position with a scrap board. when the board was flush i attach the cleats with two and a half inch screws. the final part of the seat base was to attach the 1 by 4 slats. i laid all the slats in place on the cleats and in the notches

and then i secured them with one and a half inch screws. these are the new hcrx exterior screws from spax. spax is sponsoring this build and sent me the screws to use in this project. they have a corrosion resistant coating perfect for outdoor use and like all spax screws, they don't require predrilling. this was really sweet because it saved me from predrilling 32 holes. next i moved to the seat back from 2 by 4 as i cut four uprights with 15 degree angles on the bottom. the uprights will be connected by one by four slats similar to what i did on the seat base. i laid out the notches clamped all four parts together and cut them with the dado stack just like before.

the uprights were a little bulky, so i added a taper to the back of them. i laid out an angle that looked good to me and used a basic shop-made taper jig to cut the angle on the table saw. this could easily be cut on a circular saw as well, just follow the line. i grabbed some more 1x4s and trim them to size and then laid out the uprights with the same spacing as the seat supports. i used one and a half inch screws to attach all the slats and complete the back assembly. now is a great time to sand everything and apply finish. it's much easier to work with the large flat assemblies than to try to sand into the corners once the sofa is put together. i sanded to 150 grit and applied three coats of exterior grade spar urethane.

before assembly i put some rubber feet on the bottom of the sides to minimize the contact with the water. i started assembling the couch by clamping some blocks to the armrests sides to position the seat. i laid the seat in place and secured it to the sides with two three and a quarter inch screws per corner. then i put the back in place and join it to the seat with three and a quarter inch screws through each up right into the seat supports from the back. i use two more screws to secure the outer pieces together. and i put another fastener into the back through the inner supports. i'm really liking how this is turning out the 15 degree angle on the back feels great. this is a great height for us. it's a great depth.

you may need to adjust the measurements if you are taller or shorter. we're gonna have some upholstered cushions on this and my wife is actually making them right there. there she is right now. hey wife! she's making those cushions. i'm not going to have a whole video on it just show you a little few snippets here. if you want to learn how to make some upholstered cushions for your couch just go search it on youtube. that's what we did my wife is an amazing seamstress. my mom helped out actually as well. so they did an awesome job! i'm going to get those cushions on there after they're done. we're going to haul it outside, and this thing's gonna look amazing out on the back porch.

if you want to build your own version of this modern outdoor sofa, you can go down my website. there's a link below in the description where you can get plans. i'd love to have you like and subscribe to the channel, you can use this little button right here to do it actually. also, if you want to support me on patreon you can use that little button. i got some videos over here. go check those out. some of the other things i've built as well as i'm going to have a playlist for all the outdoor patio furniture that i'm building. until next time guys get out there and build something awesome.